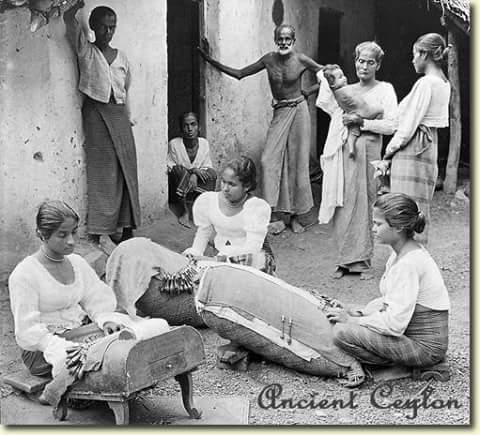 There seems to be some disagreement about who introduced lace making into the south of Sri Lanka.

However it may have in fact been the Malays.

Though the Portuguese were credited with having introduced beeralu, it was a local minority, the Sri Lankan Malays, who introduced variants of crotchet work and beeralu lace weaving in Sri Lanka. Their ancestors came from the Indonesian Archipelago and Malaya. History has it that these Sri Lankan Malays also introduced batik, sarong, some styles of jewelry making and the wearing of Batavian combs.
The ancestors of the Malays in Sri Lanka comprised political exiles, royalty, courtiers and their entourage and their antecedents and settlement in Dutch Ceylon confirmed that it was the Malays who introduced beeralu lace-making in Sri Lanka.
Nevertheless, Sri Lanka's southern lace makers have their own version of the origins of their craft. They say it is the legacy of Kuveni, the mythical queen of the demons who ruled the island before the arrival of the Indian Prince Viyaja and the origin of the Sinhalese race. She is said to have woven lace seated at a rock bobbin on Yakkini Duwa, or the Island of the She-Devil, off the southern coast of Sri Lanka. Kuveni's "bobbin" can still be seen on Yakkini Duwa, which was, until recently, purportedly haunted and cursed.

But whoever takes the credit for introducing this highly skilled craft we should all be grateful there remain a handful of ladies who practice it. 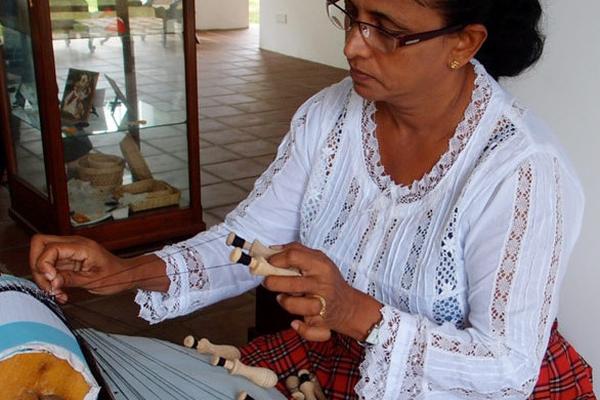 Based mostly in the south of the island around and inside Galle Fort where they can be found working away in the Museum, their wares are sold by street traders. Sadly these vendors based in the Fort adopt annoying sale techniques that detract from the highly intricate lace work of sheets, skirts/blouses, table cloths and table ware. But if you are able to rise above that and have the energy for some negotiation, you will cherish the purchase.